How to Discern One’s Vocation

A Heart and Mind Open to Doing God's Will

God has given us some means to know His will, which is first and foremost for us to know and love Him. From there, we can embark on discerning our particular vocation with an honest self-examination. There is no need to wait for a mystical vision of Jesus or Mary in order to possess certainty about a religious vocation.

Questions You Should Ask

As you begin, or continue your discernment, consider asking yourself:

When you humbly consider these questions, you can discover how best to offer yourself as a gift to the Lord and His Church. It is recommended for anyone discerning to frequent the Sacraments (especially the Eucharist and Confession), while deepening one’s own personal prayer life through spiritual reading and meditations on the mysteries of the Rosary. You may also find it helpful to confide in a spiritual director, and to contribute to the apostolic needs of your local parish or community.

Have I Rightly Discerned?

If you find yourself thinking about religious life, rejoice! It is quite possible that the Lord desires you to follow in the footsteps of Saint Dominic and all the other canonized saints and blesseds of the Order of Preachers. The Dominican vocation bears great responsibility, for our religious life is ordered not only to our own personal salvation, but to preach the joy of the Gospel to all those in need of Christ. Our brothers have found that the process of discernment is especially fruitful after entering the Novitiate. The Lord will help you discover, even through the novice year, whether you have rightly discerned. God will generously respond to your faithful answer to His call.

Clerical brothers are the brothers who serve, or will serve, as priests for the Church. For the Dominican clerical brother, his two-fold identity as a consecrated religious and ministerial priest functions in perfect complementarity for the salvation of souls. After moving hearts toward the love of God through his preaching, the Dominican priest consummates and further deepens this love through the celebration of the Sacraments.

The Dominican priest is distinctive

The Dominican priest is struck by the compassion of Saint Dominic who wept asking, “Lord, what will become of poor sinners?” The Dominican priest’s life gains its spiritual energies from the regular observance and prayer, both liturgical and private, to which he has bound himself. These energies well up within him as he offers the sacrifice of the Mass day by day, commits himself to assiduous and ongoing philosophical and theological study, and thus gives his whole life in love of God for the conversion and salvation of souls.

The Dominican priest’s life is truly the life of a priest of Jesus Christ, carried out according to the motto which developed early on in the Order of Preachers: contemplare et contemplata aliis tradere. As a priest he offers sacrifice day-by-day for himself and the whole people of God, yet his priestly life is particularly shaped by "contemplating and sharing with others the fruits of contemplation."

Although most brothers in the Order of Preachers are “clerical brothers” preparing for ordination to the priesthood, there are also brothers who are called to serve the Lord in a different manner. In the early days of the Order these friars were known as frater conversus, but today they are called cooperator brothers.

The preaching mission of the Order

And like all Dominicans, the spiritual life of the cooperator brother is centered upon the Eucharist, the Liturgy of the Hours, and daily meditations on the Rosary. Their study is for the sake of preaching, whether that be in word (lectures, presentations, and retreats) or deed (the very witness of a holy life as a consecrated religious). Finally, cooperator brothers share in the commitment to a life in common by encouraging the brothers to remain “of one heart and mind” by growing together in virtue and caring for one another in charity.

The ministry of the Dominicans has had a profound impact on my life, and we need more of them! That’s why I pray for more vocations to the Dominican Order in the Western Province! “The harvest indeed is great, but the laborers are few!”
- Dayn - Seattle, WA
I look forward to giving hope to the people of God. Despite the challenges that life brings, I want to assure everyone that Christ, in His divine mercy, loves them.
- Fr. Pius
In a new way, I can say that I belong to God. With the utterance of a few words, I became a son of St. Dominic, a brother to a family of preachers, and a joyful slave to our merciful King and His blessed mother.
- Br. Andrew Thomas
When I returned to my seat among friends and family I felt different: I now belonged totally and completely to God. No longer could I say that there was any part of my life that is not His. (On the day of his First Vows)
- Br. Nathaniel Maria
I'm delighted that vocations are up and the quality of the candidates are so good!
- Anne - Rio Vista, CA 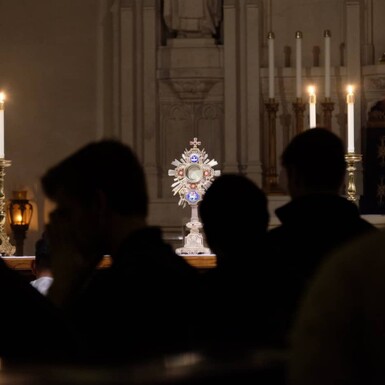 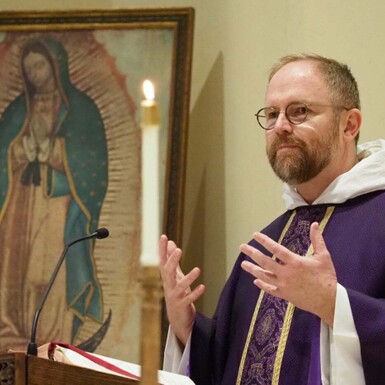 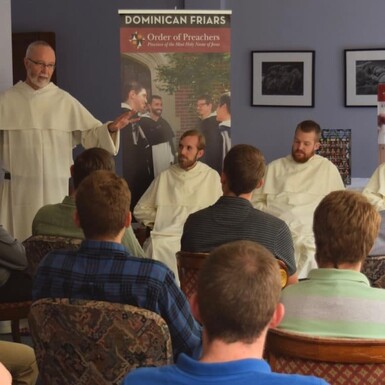 Often the best way to begin discerning whether you are called to our way of life is to attend a “Come and See” Weekend.

The weekend takes place in a “no-pressure” group setting with many other young men who are also considering the possibility of a Dominican vocation, perhaps for the first time. You will have a chance to see Dominican life first-hand, and to learn more about the Order through brief informational presentations by a number of priests and brothers.

Along with the opportunity to meet, socialize, and ask questions of the student and novice brothers in formation, guests also join the friars for the chanted Liturgy of the Hours, celebration of the Eucharist, and Adoration of the Blessed Sacrament.

Is God Calling You?

Have more questions about joining the order?